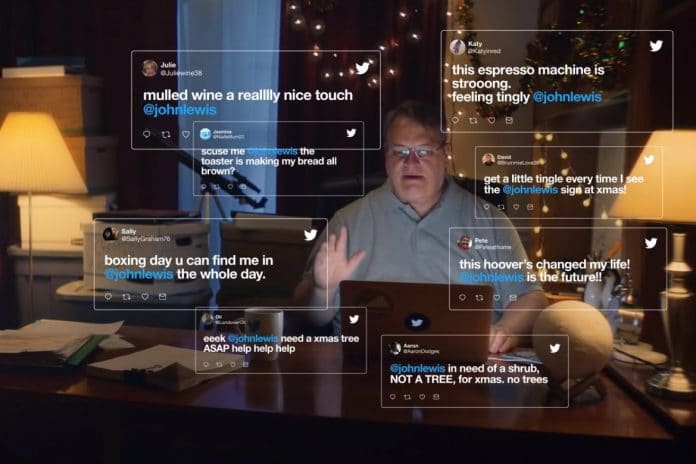 John Lewis (the man) is a Virginia-based lecturer who receives over 50,000 tweets aimed at the department store every year due to his easily-mistaken Twitter handle @johnlewis.

This includes what he describes as a “massive spike” each time the retailer’s hotly-anticipated Christmas advert is released.

He has now been celebrated by the social media platform for his patient and often hilarious responses to the endless tweets misdirected at him every year.

Not only have his responses earned him his very own advert and more followers than the actual retailer’s customer service profile, but last year John Lewis (the store) sent him a bag of presents to say thanks for dealing with wayward tweets.

The only thing I contributed to this ad was to buy every Elton John album throughout my life. @jlandpartners https://t.co/MbGbzdLi4p

I try to tell my kids that, but they remain unconvinced. https://t.co/zxMaXE1wTx

My guess is that uneven distribution of energy exploited micro fractures in the plate invisible to the eye, causing expansion and contraction that ultimately resulted in a full fracture. But what do I know? @jlandpartners https://t.co/EeP4IEMgKm

“I think it’s hilarious that people mistake me for the UK store and I do my best to direct them to the right place,” he said.

“I see a massive spike in tweets at this time of year and I always watch the John Lewis advert, especially as it becomes a big part of my conversation.”

How it Started vs How it’s Going: The Retailer Edition