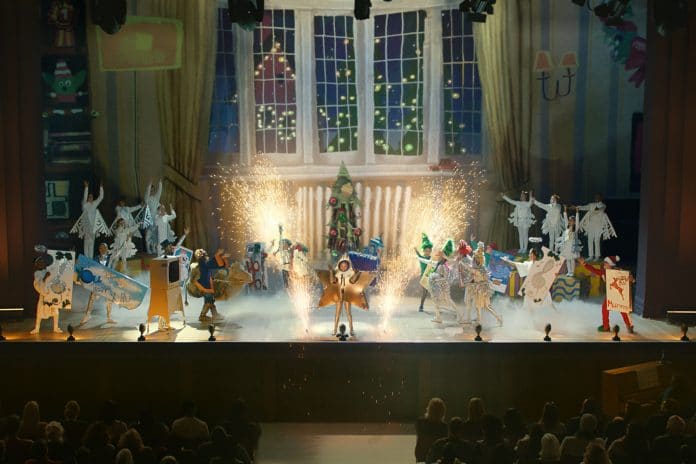 Sainsbury’s has enlisted the director of blockbuster film The Greatest Showman for its 2018 Christmas advert, which was unveiled today.

Entitled The Big Night, directed by Michael Gracey, the ad launches the Big 4 retailer’s “we give all we’ve got for the ones we love” Christmas campaign and will makes its TV premiere tonight on ITV.

The ad begins with a group of school children coming together backstage for a Christmas show.

Eight-year-old Tia Isaac, dressed as the northern star, nervously appears stage before stunning the audience – especially her mother – with a rendition of the New Radicals’ hit song You Get What You Give.

Isaac is supported by a cast of almost 60 children from across the UK playing a host of Christmas characters, such as a nativity camel, baubles and presents, a drummer dressed as a turkey, the Queen in a TV box giving her Christmas speech, and even a set of fairy lights – including the plug.

It also captures emotional reactions from the audience, as some of the cast’s real-life parents are featured seeing their child perform the show for the first time.

“I was honoured to be part of bringing Sainsbury’s new Christmas campaign to life,” director Michael Gracey said.

“Fuelled by the passion and talent of an incredible cast and crew, we set out to craft an ad that embodies the joy and imagination of the festive season.”

Sainsbury’s head of broadcast marketing Laura Boothby said: “This year, we have set out to create an advert that captures the passion, emotion and excitement of the festive season, in a setting that’s familiar to us all – no matter how old we are.

“Customers tell us that what matters most to them at Christmas is spending time together with family and friends and making it truly special for them – and that’s what giving all you’ve got is about.

“The school show is a flagship Christmas moment for many: the evenings spent frantically learning lines, the inventive costumes – the whole family truly plays a part.

“This made it the perfect setting to bring our Christmas message to life – watching little ones give all they’ve got, for their loved ones watching on.”

The advert was created by Wieden+Kennedy and Isaac’s version of the song will also be live on Spotify from today.

Sainsbury’s would not disclose the amount of money it spent on making the TV advert.

Other grocery retailers that have so far revealed their 2018 Christmas ads include Lidl, Asda, Aldi, Tesco, Waitrose and Iceland.

Although John Lewis has not yet unveiled its Christmas ad, often held as the high water mark for the season’s campaigns, there is speculation that Elton John was paid £5 million – half of the overall budget – to appear on it.