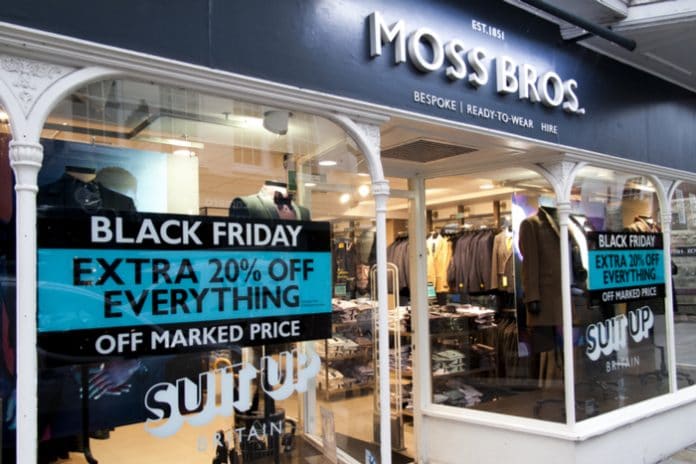 Moss Bros has recorded a dip in half-year like-for-like sales due to deeper discounting and weaker footfall but insisted its performance was on “an improving trend”.

For the 23-week period ending January 5, the formal menswear retailer said overall like-for-like sales dipped one per cent, while total sales edged up by 0.6 per cent year-on-year.

The retailer experienced lacklustre in-store sales due to reduced footfall during the period, resulting in a marginal 0.1 per cent increase in retail like-for-likes and 1.9 per cent year-on-year growth in total sales.

Moss Bros’ online arm was the star performer of the business, with sales growing 27.8 per cent year-on-year.

Ecommerce sales now made up 16.2 per cent of Moss Bros’ group revenue, up from 12.8 per cent last year.

On the other hand, hire sales dragged the retailer’s overall performance, dropping 11.2 per cent year-on-year on a like-for-like basis.

Hire sales comprised of less than 10 per cent of Moss Bros’ group revenue for the 23-week period.

Meanwhile, gross margins for the period dropped by 2.6 per cent year-on-year due to increased promotional activity and the “required deeper discounting than planned” after Black Friday.

Despite the results, the retailer hailed improvements in sales during the second half of its financial year against a “challenging consumer backdrop”.

It added that there was “an improving trend” during the first 10 weeks of its fourth quarter, when it recorded a 3.8 per cent year-on-year uptick in total sales.

Moss Bros also said it “continued to make progress in a tough marketplace” and the stock issues it faced during the first half of the year have been “fully resolved”.

The retailer added that it remained debt-free and that it expected to deliver a performance in line with current revised market consensus of an adjusted loss of £600,000.

“As I noted at the time of our interim results in September, we had already seen more intensive discounting from our competitors and this has continued throughout the period,” chief executive Brian Brick said.

“Having originally sought to resist discounting pressures, we too have found the need to adopt a more tactical, discount-led pricing stance across all retail channels.

“Whilst this proved successful in delivering top line sales growth, there has been an expected negative impact on gross margin rates, which ensured that the group managed the level of terminal stock.

“Despite the improving trend in performance, we anticipate the period ahead will continue to be extremely challenging, as a result of the uncertain consumer environment, wider political backdrop and the significant cost headwinds that we continue to face from a weaker pound and further increases in business rates and employee related costs.

“We do however see the weaker environment as an opportunity to enhance our specialist market position and strengthen our core brand proposition, so we retain a sustainable point of differentiation.

“We remain debt free, with a strong balance sheet and are confident in our ability to deliver enhanced returns to our shareholders over the longer term”.