Former Clarks chief executive Mike Shearwood is dragging the retailer to an employment tribunal over claims he was not given a chance to respond to misconduct allegations.

According to The Sunday Times, Shearwood will allege he was given a list of allegations against him at a board meeting last June, just hours before his departure was announced.

The Times also reported that Shearwood says he was ousted from Clarks because he tried to expose questionable accounting practices and corporate governance.

Shearwood was forced to vacate his role as Clarks chief executive with immediate effect in June last year over “complaints of conduct contrary to the family-owned company’s code of business ethics”.

Several media reports indicated that Shearwood, who had with Clarks since September 2016, allegedly spoke to colleagues using racist and sexist language.

The legal battle between Shearwood and C&J Clark, the parent company of the footwear retal giant, is set to start today at an employment tribunal in Bristol.

“We can confirm that Clarks is currently engaged in an employment tribunal involving former CEO, Mike Shearwood,” a Clarks spokeswoman said.

“Clarks rejects all allegations raised by Mr Shearwood and we stand by our decision in relation to Mr Shearwood’s termination.

“Mr Shearwood resigned from Clarks following an investigation into complaints of conduct contrary to the family-owned company’s Code of Business Ethics.

“The investigation showed that MS’s conduct fell short of the behaviours expected of all its senior management on several occasions.

“It is Clarks’ firmly held belief that Mr Shearwood is fabricating a frivolous and vexatious narrative surrounding his time at Clarks purely with the intent of eliciting a termination payment from the business.

“Clarks made it clear at the time of his departure that his behaviour was such as to warrant no compensatory or notice payment.

“Clarks hopes the Tribunal will agree with us and see Mr Shearwood’s claim for the tactical device it is.

“This is a calculated attempt to damage the Clarks business and its reputation.”

Senior independent director Stella David took on the role of interim chief executive in the wake of Shearwood’s departure before she was promoted to chair of the retailer in April. 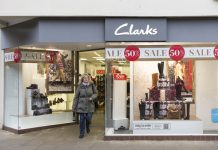