Majestic Wine has revealed its managing director of two years, Josh Lincoln, has stepped down from the business amid a management reshuffle.

The alcohol retailer’s executive chairman and chief executive John Colley has set his sights on reshaping his executive team.

The retailer’s buying and merchandising director Robert Cooke has been promoted to chief commercial officer.

Cooke joined from Big 4 leader Tesco last April, where he was the beers, wines and spirits boss.

Majestic Wine is expected to name a new chief customer officer in due course, but Lincoln will not be directly replaced, with Colley assuming the role of chief executive.

Colley was initially named as executive chair when he returned to Majestic Wine in August 2019 – two years years after quitting to take the reins at Hobbycraft – following Majestic Wine’s takeover by US private equity group Fortress.

Earlier this month, Majestic Wine recorded a sales rise during the festive period thanks to increased sales in English wine, cremant and spiced rums.

Like-for-like sales increased 4.3 per cent in the three months to December 30.

“2020 at Majestic will be a pivotal year, as we celebrate our 40th year and begin the process of building for the future – under new private ownership,” Colley said.

“We’ve started well, with a superb Christmas performance, and are now preparing for our next chapter with a new strategy.

“Ensuring we have the right leadership team in place, with the right skillset, to deliver our future business plans is crucial to the success of Majestic this year, and beyond.

“That is why we have acted to make these recent changes to the retail board. I am very very excited about the future.” 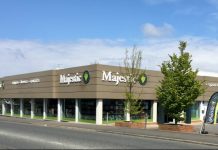