Earlier this week, Arcadia revealed that Wilson was serving her notice and was due to leave the business later this year.

She is expected to join M&S in spring, Drapers reported.

She first joined Topshop as merchandising director in November 2012 before serving as merchandise director of Arcadia-owned Wallis between October 2009 and 2012.

Wilson was also the international commercial director at British retailer Monsoon Accessorize from May 2005 to October 2009.

M&S has also seen other executives from Arcadia joining its company in the past year.

Wilson is the latest Arcadia executive to join M&S.

For the 13 weeks to December 28, M&S reported a “disappointing” Christmas trading period despite its food division making a “standout” performance.

UK clothing and home sales dropped by 3.7 per cent year-on-year, and was blamed on an “underperformance in menswear and gifting”. 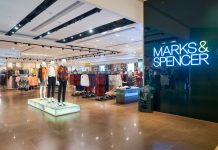