// The openings will create around 600 jobs

Screwfix has revealed plans to open more than 50 stores in the UK and Ireland this year, a move that will create around 600 new jobs.

Of the total new stores, 40 will be in the UK, creating up to 500 new jobs, while the remaining 10 stores planned in Ireland will create 100 new jobs.

The DIY retailer said the new roles will be in areas such as retail management, service assistants and supervisors and be created by the end of January next year.

The news came as Screwfix, which currently has 711 stores in the UK and 12 stores in Ireland – employing 11,643 people – announced an increase in its overall target for store numbers.

It now plans to increase the total number of Screwfix outlets to over 900 in the UK and Ireland, up from the previous target of 800.

The raised target follows the identification of further opportunities for stores in inner cities and rural catchment areas.

The rapid growth of Screwfix has seen the trade retailer open, on average, one store per week for the last five years.

Earlier this year, it announced that it had reached annual sales of £2 billion for the first time, just five years after reaching sales of £1 billion.

Screwfix said “a major part” of its growth has been its focus on ecommerce, using its stores as fulfilment centres for click-and-collect deliveries which have surged during the Covid-19 pandemic.

The growth has also supported by parent company Kingfisher, whose “Powered by Kingfisher” strategy focuses on empowering its retail banners in key areas such as own-brands development, buying and sourcing, ecommerce, and technology and services.

Screwfix’s growth has led to significant recruitment during the last five years, including over 1000 new staff aged under 24 last year.

Meanwhile, more than 800 staff have been promoted internally over the past year, including many who have completed apprenticeships.

“I am incredibly proud of all Screwfix colleagues for their support in continuing to keep our customers supplied safely,” Screwfix chief executive John Mewett said.

“We’re delighted to be opening 50 new stores this year, creating 600 jobs. The growing demand for convenience means we now see scope for over 900 stores in the UK and Ireland, which will help our busy customers get their jobs done.

“We know that time is money for our customers and these new stores in the UK and Republic of Ireland enable us to provide our customers with added convenience and certainty, and provide even more job opportunities for local communities when they need it most.” 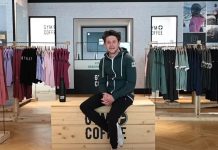