Total net sales at youth fashion chain American Apparel were up ten per cent in the final quarter of 2011, with one new store and two new concessions in the UK helping push up revenues.

Annual trading was up three per cent year-on-year, which is viewed as encouraging by the company‘s management, especially as at one point last year the business had a very uncertain future.

Last April, the retailer secured almost $15 million from private investors, which effectively saved the business from bankruptcy, and a total sales figure of $547.7 million for the year has brought confidence to Chairman and CEO Dov Charney.

“In December, we continued to build momentum in our business,” he explained, reflecting on the like-for-like annual sales growth of 12 per cent recorded for the month.

“Our sales exceeded plan in all channels and we saw good progress in our wholesale channel across a broad spectrum of customers.

“Our retail sales increases were also broad based with notably large increases in the US, in all Asian markets, and in Australia. Our product is resonating well with our customers both in stores and online.”

Like many retailers across the world, American Apparel‘s main driver of sales during 2011 was its multichannel division. 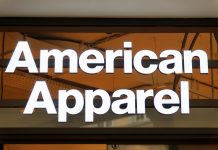