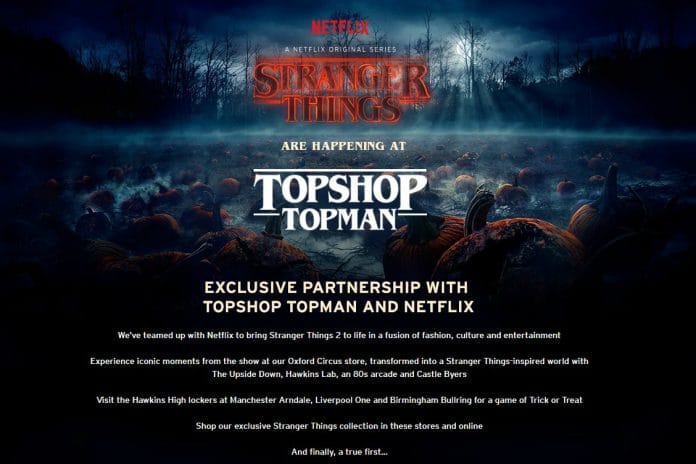 To coincide neatly with both the launch of the second series of Netflix’s hit nostalgic series Stranger Things and Halloween, Topshop has launched an 80s-inspired range emblazoned with the show’s cast.

A 28-piece collection will be available from today in Topshop and Topman, including Stranger Things-themed retro lunchboxes, backpacks, caps, t-shirts and jumpers.

Visit our Oxford St. store before Oct 31st to get properly kitted out to watch Stranger Things 2 on @NetflixUK 💡https://t.co/ly1YSKC3LF pic.twitter.com/MIcN50nB1U

For all the #justiceforbarb campaigners, there is and an entire book devoted to the character, alongside “never forget” Barb t-shirt.

Got my @Stranger_Things top from @Topshop and ready to binge watch the series. Super excited 🎉 pic.twitter.com/ziNgfOZEPK

Until October 31 scenes including Hawkins Lab, the Upside Down, Castle Byers and an 80s arcade will all be faithfully recreated in-store for customers to interact with.

The second series of Stranger Things was released today on Netflix.