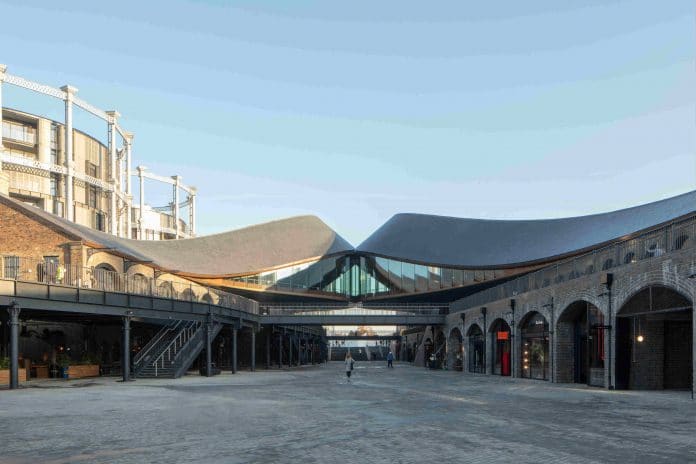 The doors have finally opened to Coal Drops Yard, London’s newest shopping and dining precinct in King’s Cross and one of the city’s most ambitions regeneration projects.

The first wave of stores that opened today represent a majority of those 50-plus retailers that are confirmed to launch at the precinct, alongside Lower Stable Street and its number of pop-up stores for emerging brands and creative workshops.

year, and was latterly the location of nightclubs Bagley’s and The Cross.

The stores and restaurants are located in canal-side arches fronting on to cobbled courtyards, within the original “coal drops” themselves and across a series of raised iron viaducts.

Larger statement stores sit at each street corner, with one dual-aspect space crowning the street, located directly beneath the striking “kissing” rooftops.

“It has been a huge privilege working on Coal Drops Yard, not only because it’s the studio’s first major building completed in London, but also because it is in King’s Cross, where my studio and I have been based for the last seventeen years,” Heatherwick Studio founder Thomas Heatherwick said.

“These amazing Victorian structures were never originally built to be inhabited by hundreds of people, but instead formed part of the sealed-off infrastructure of London.

“After serving so many varied uses throughout the years, we’ve been excited by the opportunity to use our design thinking to finally open up the site, create new spaces and allow everyone to experience these rich and characterful buildings.”

“This diversity will be mirrored in those who visit – Coal Drops Yard has something for everyone, and will always offer a reason to return.

“It is an extremely complex project, one that successfully unites the area’s heritage with Heatherwick Studio’s progressive architecture, creating stimulating spaces for both the brands and the people that will bring these buildings back to life.

“Coal Drops Yard will be a vital part of the King’s Cross experience, and we thoroughly look forward to welcoming the public to discover it.”