The working from home revolution may be providing employees with more freedom but it’s hammering a vast array of sectors from transport to casual dining.

The collapse of TM Lewin for the second time in two years demonstrates how another sector is struggling to find its way in this new working environment. Formalwear has been blighted over the past two years as office workers have done away with their suits and ties in favour of more comfy clothes for Zoom calls on the sofa.

The move towards hybrid working, whereby people spend part of their week working from home, looks here to stay. For example, the number of journeys on the London Underground reached 60% of pre-pandemic levels last Monday, despite all Covid restrictions ending more than two weeks ago.

“During the pandemic, formalwear was one of the worst hit sectors because of working from home. It has picked up a bit since restrictions have been lifted but with hybrid working an ongoing trend, and office dress codes becoming a lot more casual, it has not rebounded to where it was pre-pandemic,” she says.

However, Moss Bros chief executive Brian Brick insists that reports of the demise of the suit are premature.

“We are not seeing that the formalwear industry is in dire straits, rather it is changing as consumer styles have changed post lockdown,” he says. “What we have seen over the last two years of working from home is a softening of formalwear and a smartening of casual.”

M&S says this trend towards more casual dressing was evident before the pandemic. In fact, it flagged it to investors back in 2019 and said it was reducing its dependence on formalwear.

“The pandemic hit fast forward on the trend for more casual dressing that was already in train, especially for the office, where for many chinos and a shirt is their new uniform,” he says.

The retailers adapting their offer

As a result, M&S has pulled suits from many of its stores. Last year, the retailer removed the products from more than half of its 254 bigger stores, and now only sells the product in just over 100 of its destination shops and online.

“What we have seen over the last two years of working from home is a softening of formalwear and a smartening of casual,”

However, it has not moved away from workwear. Instead it has adapted its offer with its ‘Smart redefined’ collection, which ups its focus on separates – what Taylor terms “easy to wear, stylish clothing that can be worn in lots of different ways”. This includes the “broken suit”, a blazer worn with jeans or chinos and a shirt.

It has also merchandised its products in store and online so smart items can be worn more to mix and match.

For example, under the ‘Suits & Formal Clothing’ tab on M&S.com there are options to view ‘smart trousers’ rather than simply seeing the whole suit.

To cater for the consumer that is craving comfort, the retailer has also produced a smart-casual suit, which is made from stretchy jersey fabric, with a formal-looking jacket with soft shoulders and smart trousers that are actually sweatpants.

They are not the only brands that have adapted their offer to cater for the modern worker.

Brick says Moss Bros has “leant into the smartening of casual trend” with the introduction of casualwear, including its new collection with First Dates TV star Fred Sirieix, which he says has broadened its appeal and given customers new reasons to shop with Moss Bros.

Hawes & Curtis has also expanded its product offering to include more casual clothing, such as chinos, casual jumpers and even some loungewear, according to ecommerce director Antony Comyns.

Menswear specialists insist there has been a pick up in trade since Covid restrictions have lifted.

Brick says Moss Bros is happy with how it is performing and points out that Google analytics trends show that searches on men’s tailoring were up 58% compared to this time last year.

Next chief executive Lord Wolfson also calls out an improvement in suit sales: “There’s been a very strong return to formalwear, particularly in men’s. Not just work suits, event suits as well.

“We plan to increase our office throughout the year,” he adds.

Hawes & Curtis’ shirt sales are also improving, according to Comyns. “We’ve come out the other end and people are buying shirts. We’re seeing an increase in that side of the business but are we seeing it because people are going back to the office, or because there’s a £120 million hole where TM Lewin used to be?”

Although many are still working from home, Comyns points out that many of the sectors that traditionally wear more formal attire are leading the return to the office.

Goldman Sachs CEO David David Solomon ordered its staff to return to the office five days a week earlier this month and called working from home “an aberration” that it is seeking to correct.

Comyns says: “There’s many sectors where they think formalwear sets them apart and they insist on it. You’re not going to see people going into The City wearing ripped jeans and hoodies. Those guys will still come back wearing a smart pair of trousers and a shirt.”

He also points out that those sectors have a larger than average disposable income and can spend more on their workwear and says anecdotally, formalwear brands are reporting strong sales of “very high-end suits” right now.

From an online perspective, Comyns says it is possible to specifically target consumers working in professions more likely to buy formalwear, particularly via social media.

Experts believe that TM Lewin’s may be suffering disproportionately in the highly competitive formalwear market because of its decision to adopt an online-only model following its administration in 2020.

GlobalData apparel analyst Pippa Stephens says: “I think they were massively impacted when they shut their stores. People buying suits want to try things on and get things fitted.” 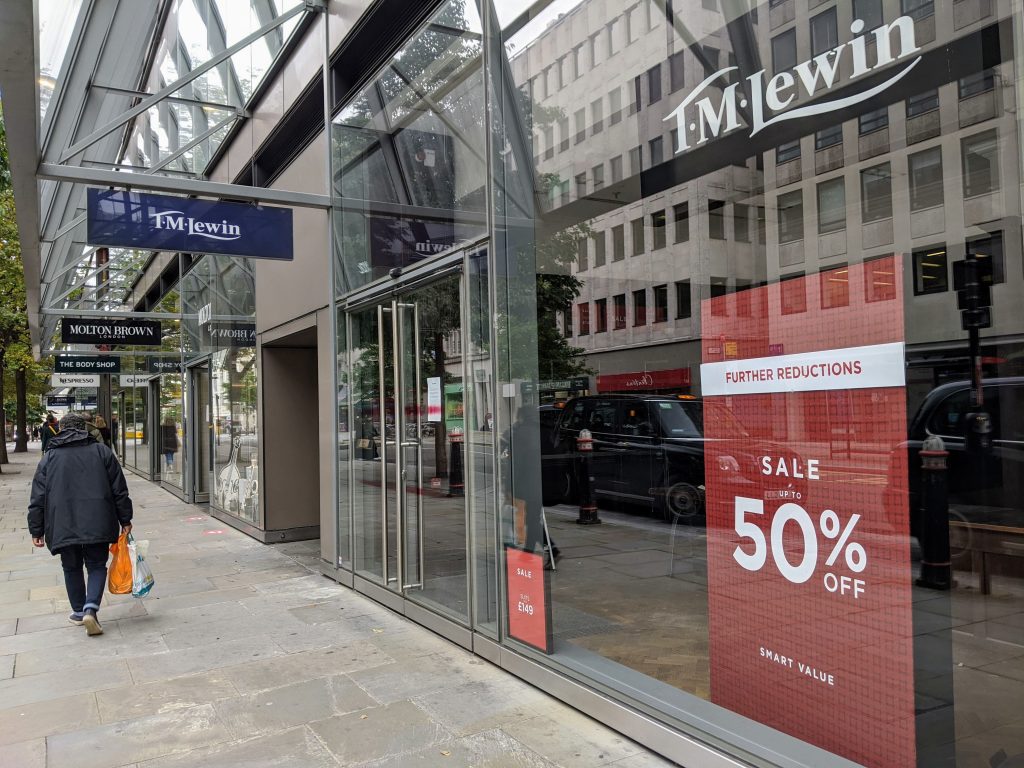 Comyns says that although TM Lewin’s original 66-store portfolio was likely too many shops, stores are necessary in the formalwear market and help fuel online growth.

“You may not need as many stores and you’ve got to be careful where you have those stores but shoppers want to try something on. Once customers know that shirt is perfect for you in terms of size and quality,  they’re more than happy to re-order online,” he says.

“If you look at a map of where your online customers are, you would be able to plot the stores you have.”

Comyns explains that retailers also lose the omnichannel benefit of stores. He uses the example of click-and-collect shoppers who can be upsold when collecting orders in store.

What next for the formalwear industry?

Stephens believes that the formalwear industry will not fully rebound for some time.

“In the UK, the suit and ties market will remain below pre-pandemic levels for the foreseeable future,” she says.

However, that does not mean that people will stop dressing smartly all together. It’s just that smart no longer means suits and ties for many consumers.

“You’re not going to see people going into The City wearing ripped jeans and hoodies,”

“It’s not the end of formalwear altogether but retailers need to adapt as consumers want different products to what they did pre-pandemi,” says Stephens.  “Retailers should add more smart casual elements and comfortable clothing into their ranges.”

Conversely, Comyns points out that many are choosing to adopt a smarter attire for ease of getting dressed each day as choosing from their entire wardrobe is too time-consuming.

“All you need is two or three suits and a change of shirt every day and you don’t have to think about what to wear,” he says. “People are likely to spend more money and time thinking about their work outfits wearing whatever they like.”

Of course, formalwear can also be worn outside of the office and, after two years of cancelled events, Brick says that shoppers are looking for reasons to spruce themselves up.

Indeed, M&S’ Taylor said it saw a surge in suit sales last summer because of the wedding backlog, and it is expecting the same this summer.

“Elements of a suit – or a full suit – remains an important staple in many men’s wardrobes, especially for the big occasions,” says Taylor. “Ultimately, men tell us they want to look stylish and smart – our job is to make sure we have the services and products to help them – including the very best suits on the high street.”

The suit is not dead, but it might get taken out of the wardrobe on fewer occasions going forward. While some sharp dressers will never be without their three piece, to appeal to a mass market retailers need to adjust to what dressing smart means for the modern man.