Discount grocer Aldi has posted an all-time record share of the grocery market of 3.5 per cent as it continues to grow ahead of rivals, new data released today reveals.

Aldi also reported the highest ever year-on-year growth of 31.5 per cent in the 12 weeks ended May 12th 2013, according to Kantar Worldpanel, continuing to break records as shoppers increasingly turn to the value supermarket amid ongoing economic uncertainty.

Similarly, Lidl saw its market share rise to its largest share of three per cent over the period, reporting sales growth of 8.9 per cent while upmarket chain Waitrose also maintained its recent success.

Holding on to the record share of 4.9 per cent recorded last month, Waitrose witnessed sales growth of 12 per cent over the period, more than three times the market average.

Director of Kantar Worldpanel Edward Garner said: “The success of Aldi, Lidl and Waitrose are clear examples of how shopping habits are divided across the country.

“For many consumers, the discounters are increasingly becoming part of the weekly shop – supplementing trips to the big four retailers and offering a convenient and cheaper option.

“We expect this growth to continue, particularly as store expansion plans open up the discounters to a wider number of customers.”

In terms of the big four, Sainsbury‘s again outperformed competitors, reporting sales growth of 5.6 per cent and market share of 16.8 per cent.

Meanwhile, Asda reported a 2.8 per cent sales rise while Tesco‘s and Morrisons‘ sales climbed 1.7 per cent and 1.2 per cent respectively.

Garner concluded: “This market polarisation also continues to pile the pressure on the big four grocers, with only Sainsbury‘s beating the market and growing its market share this period.

“Although Morrisons shows a share loss, it is worth noting that the retailer returned to growth in 2013 and continues this upward trend in the latest period ? growing 1.2 per cent.

“With its plans for online and accelerated convenience store coverage now in place, the retailer will hope that successful implementation will return it to share growth.” 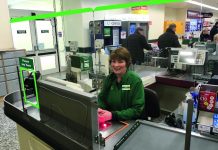