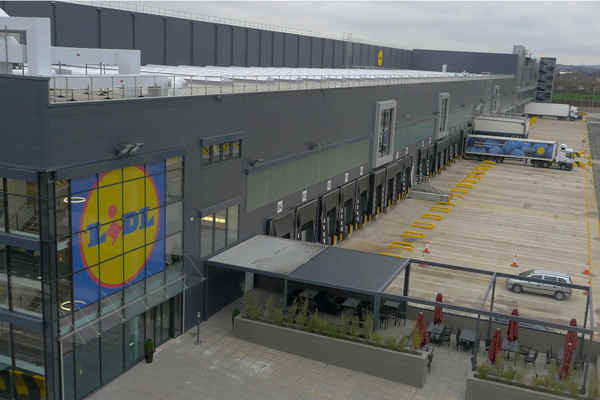 Lidl has just opened its 11th regional distribution centre (RDC) in the West Midlands, providing 400 jobs for the local area.

It‘s the German discount grocer‘s second distribution centre to open since the Southampton one six months ago, and forms part of its three-year £1.5 billion expansion investment in the UK.

Lidl opened its first British-based distribution centre in 1994 nearby Lutterworth, and currently has warehouses in 10 other locations up and down the country.

The supermarket retailer‘s recently-announced plans to relocate and expand its Scottish distribution centre to Eurocentral near Glasgow, creating over 350 jobs, has also been given the green light for construction, while further warehouses in Exeter, Doncaster and Bolton are also in the pipeline.

The new Wednesbury distribution centre will serve 56 stores, with an additional eight stores eight stores planned in the next two years.

“The opening of our new Lidl Wednesbury warehouse marks an incredibly exciting time for the business, particularly in and around the West Midlands,” Lidl UK regional director Richard Shaw said.

“Not only is it necessary to accommodate the scale of our existing and future operations in the area, we have been able to create significant job opportunities as a result of the new warehouse and will continue to invest in the West Midlands and beyond, as we move forward with our expansion plans.

“We are incredibly proud of the teams here at Lidl that have been working in the background to get the new warehouse off the ground, and would like to extend our thanks to all those involved for their hard work and dedication.”