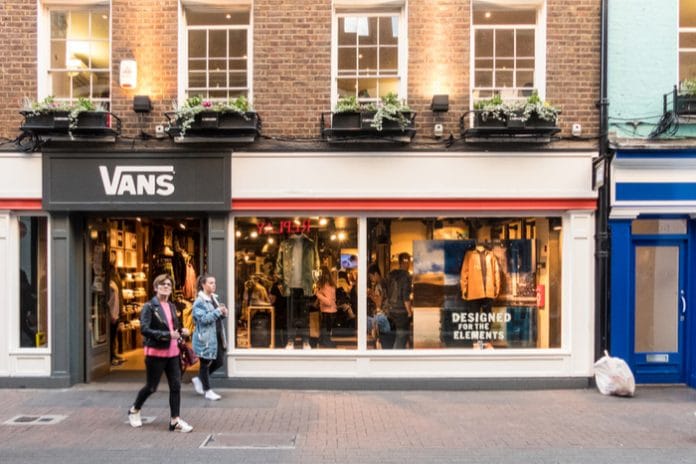 A healthy uptick in first quarter revenues has prompted VF Corp to raise its outlook for the remainder of its financial year.

VF Corp – the parent company of fashion retailers and brands including Vans, Timberland, The North Face and Kipling – revealed revenues of $2.3 billion (£1.8 billion) for the first quarter ending June 29, which represents a six per cent year-on-year uptick at constant currency rates.

This was driven by a 29 per cent year-on-year surge in online sales at constant currency, followed by a 16 per cent rise in in-store sales.

Meanwhile, Vans was the company’s star performer among its stable of brands, which saw revenues – at constant currency – grow 23 per cent year-on-year during the quarter.

This was followed by The North Face, which enjoyed 16 per cent growth, and then Timberland and Dickies, which each saw revenues grow two per cent.

For its EMEA market, of which the UK is a part, VF Corp saw revenues grow five per cent year-on-year at constant currency.

The performance of its brands were almost aligned with their overall performance globally, with Vans leading at 15 per cent growth.

This was followed by The North Face at 11 per cent growth – marking its 14th consecutive quarter of double digit growth.

However, Timberland revenues declined four per cent, but VF Corp said this was in line with expectations and the vision was return to growth by the end of the financial year.

VF Corp said its adjusted gross margin was up 54.4 per cent, and adjusted operating margin 7.2 per cent.

This was mainly due to the spin-off of VF Corp’s jeans business. ​

Looking ahead, the US-based company said adjusted revenues were predicted to grow by six per cent to $11.8 billion (£9.4 billion).

This includes an additional $20 million, or $0.04 per share, of incremental investment, reflecting growth of 16 per cent to 18 per cent.