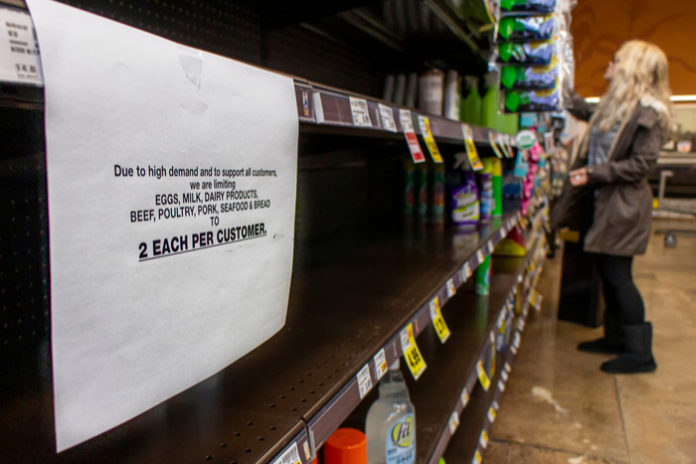 The last time the UK had a rationing system was during World War II, when the government introduced it in 1940. It was slowly lifted after the end of the war in 1945, but didn’t finally end until 1954.

Today the UK remains dependent on imports for the majority of its food. That may be fine during non-volatile times but in the age of the Covid-19 pandemic, logistics are vulnerable to borders closing down and the risk of truck drivers falling ill with the highly contagious virus.

Stockpiling and panic-buying behaviours are contagious themselves. In the early days of the pandemic, pleas for shoppers to stop hoarding went unheard. This, coupled with issues around logistics and international imports, pushed all the major grocery chains into implementing restrictions on items purchased in order to cope with the sudden spike in demand.

Last week, research revealed that Brits spent an extra £1.9 billion on stockpiling groceries in the run-up to the lockdown coming into effect on March 24.

Nielsen found that in the four-week period ending March 21, grocers welcomed an additional 79 million shopping trips, while Kantar said March was the biggest on record for UK grocery sales as grocery spend totalled £10.8 billion in that period alone.

By the end of March, Aldi chief executive Giles Hurley wrote to customers to inform them that its rationing rules have proved effective. Since then, the German discount grocer has gradually eased product restrictions on almost all products.

“The relaxing of purchase limits follows a return to stable levels of trading and good availability across all Aldi stores,” the retailer said in a statement.

Julian Bridle, vice president at software company Symphony RetailAI, argued that rationing may have been effective in this instance, but was not the whole solution.

“The way retailers reacted to the sudden and sustained increase was the only sensible way they could – to introduce rationing and strict controls,” he told Retail Gazette.

“Gradually, this appears to have brought the problem under control, so it was a very effective short-term mechanism.

“Rationing is not the whole solution”

“But now there is data available to analyse, and an interesting picture emerges. What actually happened is not as most people think.

“Although British shoppers spent an additional £1 billion on food in the first three weeks of March, stockpilers – shoppers purchasing significantly more compared with their normal spend – only accounted for three per cent of all buyers.

“The vast majority of shoppers were adding a few items they both did and didn’t normally purchase, and they were shopping a little more frequently than normal.

“But over huge numbers of shoppers, that small increase created the spike that we saw. The herd mentality was not panic buying for the most part, it was actually normal people taking sensible precautions in the face of an uncertain immediate future.”

Durham University Business School research assistant Aarron Toal said rationing may have relieved the pressures suppliers faced due to unexpectedly soaring demand or to allow grocers to regain control of stock levels – but the impact this may have on the consumer could be more damaging, “particularly in the short-term”.

“From a consumer’s perspective, an initial knee-jerk reaction to this news could instil further feelings of panic and anxiety as additional restrictions are imposed upon them,” Toal argued.

“Inadvertently, consumers could find themselves spending more time out of their homes visiting multiple stores, and more frequently, if they are unable to acquire the resources they need as a result of increased limitations, flouting the government’s lockdown rules and further increasing panic.

“To the casual observer, grocers engaging in rationing practices could actually be seen as a positive approach in their commitment to feed the nation, ensuring that by implementing these control measures there is enough food to go around.

“In reality however, a more serendipitous benefit allows grocers to focus less about the welfare of their customers, but instead increase their commerciality by showcasing how fully stocked their stores are, encouraging consumers to visit where they will find bursting shelves packed with goods, thereby instilling comfort and reducing panic but ultimately ensuring they maintain the footfall. It becomes a reliable place to frequently shop.”

Toal added that the consumers’ decision-making hierarchy has flipped.

“The distinct ingredients that drove loyalty have changed dramatically,” he told Retail Gazette.

“Experience, brand, price and quality now have different levels of importance as a mindset of acquiring the product by any means necessary dominates the consumer.”

The chief executive of bakery chain Gail’s, Tom Molnar, echoed the sentiments of many by highlighting that consumers should only buy what they needed rather than stockpile, which risks leaving those in need without food.

“For us at Gail’s, we haven’t yet come across ingredients shortages, but we have found that a lot of our farmers and artisan makers are left with a smaller market and so we have started selling their food to try and help them out and to keep our customers’ kitchens stocked,” he told Retail Gazette.

Molnar also noticed a change in customer behaviours, in that there’s been an increase in online sales for home delivery.

“Once the high street is back up and running, we expect people to be more used to online shopping, and to use our click & collect service, picking up from our neighbourhood bakeries,” he said.

Bridle argued there wouldn’t be any lasting effects of rationing once the pandemic is over, as retailers would learn from the data and adjust to ensue “a new normal”.

“The legacy of Covid-19 for grocery retailers will be data, which in an increasingly technology-driven world will determine a retailer’s future wealth,” he said.

While every retailer, supplier and MP has assured customers there was no shortage of food, the problem was getting it onto the shelves. Rationing was viewed as a solution to bring buying and stock levels under control, but a combination of softer rationing and more effective logistics may ensure supply is able to meet demand during the pandemic.

The question for many retailers now is whether grocers that supported the panicking consumer be the new way to create loyalty. In other words, will the ability to generate stability, or provide calm amidst panic, be the ultimate ingredient for long-term brand loyalty? Will those grocers that increased capacity for home delivery, hired more staff in-store to stock shelves amid shorter trading hours to ensure stable stock availability be the winners?

It’s arguable that the grocers which adapted the quickest could become the most successful. After all, consumers will always remember who was there to best support them in their hour of need.