// All the retailer’s goods are baked with natural ingredients

The Original Dog Bakery has opened its first ever long term trading space at Liverpool One shopping destination.

Previously operating from a mobile tuk-tuk at the centre on Wall Street, the Liverpool based business specialises in handmade patisserie-style baked products for dogs.

Baked with insight into canine health and wellbeing, the bakery’s goods are all created entirely from natural ingredients, with no added salt or sugar.

The kiosk’s ‘best in show’ treats range from cookies, brownies, and doughnuts, to crunchy popcorn and six-inch birthday cakes.

The opening of the Wall Street location coincides with the three business’ founders, Daniel Carroll, Caitlin Carroll and Eilish Clarke, leaving behind jobs in other fields to focus on the bakery concept full-time.

The launch also follows the release of data from the Office for National Statistics revealing dogs as the nation’s most popular pet, with just under one in four UK households owning a dog.

The Original Dog Bakery co-founder Daniel Carroll said in a press release: “Liverpool One has played a key role in driving and supporting the rapid growth of our business since we launched less than 12 months ago, so it made sense to put down our roots at the destination.” 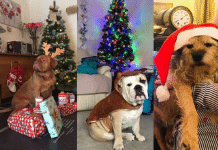